Augmeanted’s debut album, Life, twice, will be released June 21, 2022. Life, twice, takes its name from the Anais Nin quote, “We write to taste life twice, in the moment and in retrospection.” The 10-track recording, produced at Bemidji’s Supple Studios, is a mix of vocally-driven meditations on moments that leave us speechless, and violin-driven improvisations saying what’s impossible to say. The album was made possible in part by a Region 2 Arts Council Individual Artist grant with funding from the McKnight Foundation.

Augmeanted invites you closer to the transcendent power of living music with our distinctive classical rock vibe, crafting tales and tunes cut free by the saw waves of our sound.

Taking our cue from Victor Hugo, we write music to “express that which cannot be said and on which it is impossible to be silent,” giving voice to moments best carried along the heart’s strings.

As we spiderwalk the strings and sing through heart and keys, we hope you’ll find yourself feathered by the wings of the crescent moonrise, embraced by the concert hall’s symphonic swirl, or rib-tickled by Appalachian fireflies.

Though Augmeanted is new musical collaboration for us as cousins, we are both established musicians. Geoffrey Taylor orchestrates the strings of his fiddles, mandolin, and ukes in Missoula, Montana and Mary Overlie sings through her heart and keys in Mudsong, based in Bemidji, Minnesota.

In addition to our first album, we are also at work on a theatrical tale about the birthday festivities for a scrap of yet-to-be-born song. 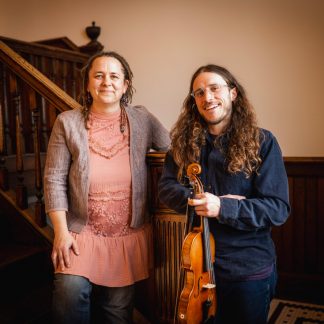